skip to main | skip to sidebar

RickMcDonoughPhotography
Growing up in the suburbs of Washington D.C., Rick first became interested in photography as an early teenager experimenting with the family Polaroid camera. He very quickly discovered that he naturally viewed the world on a much smaller scale, taking pictures of, and interacting with the details in life. Soon after, he studied black and white photography for several years during high school. He then went on to study photography at the university level, ultimately obtaining a bachelor degree in English Literature.

Specializing in fractions, abstractions, slices of experiences, Rick views the minute pieces as opposed to “the whole”. His images are evocative typically possessing a strong sense of contrast, texture, and reflection. He encourages and urges the viewer to slow down, re-examine the composition, reconsider what has been seen and emotionally connect. His images usher the viewer into a place that is abstract yet strangely familiar. He uses the camera, not as a mere mirror to reflect or document, but more as an extension of himself through which he can channel feelings, ideas, and experiences.

Several months back my father in law and I decided to attend the Huntington Beach Concours d' Elegance as it was something that we had always been meaning to check out. It was a beautiful day in June with a pretty decent survey of cars spread out across the grass of the Huntington Beach Central Park, just behind the public library. 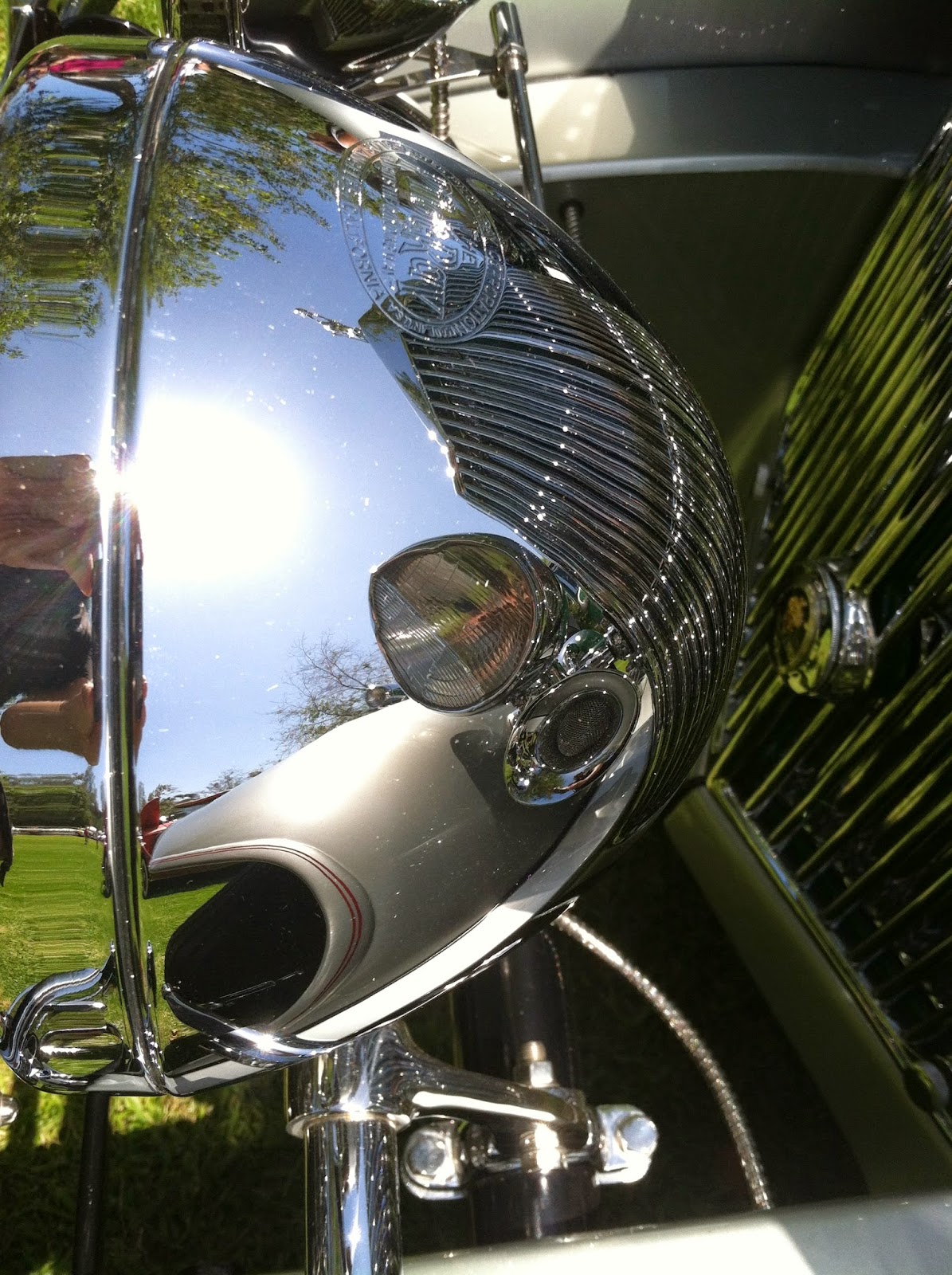 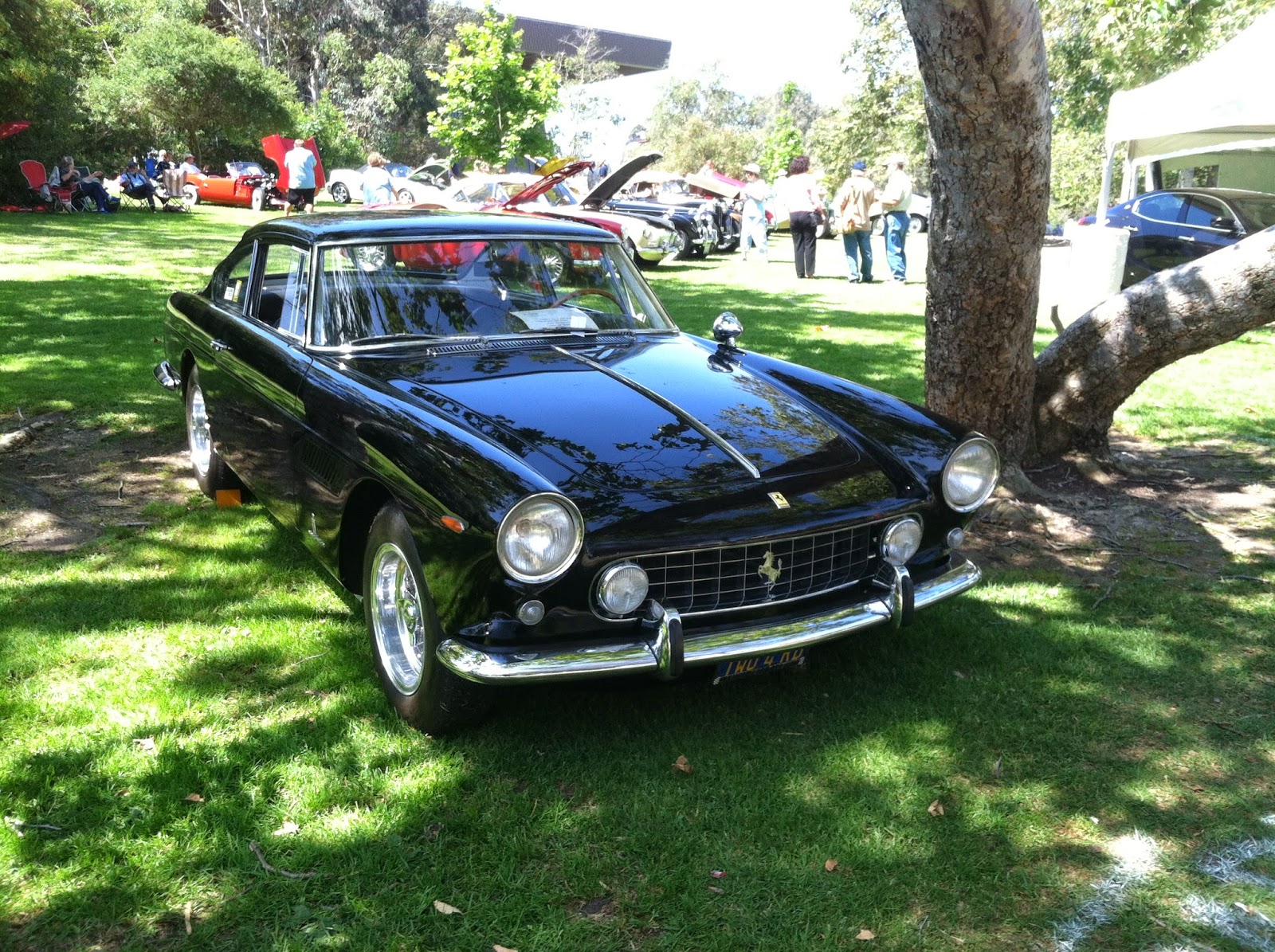 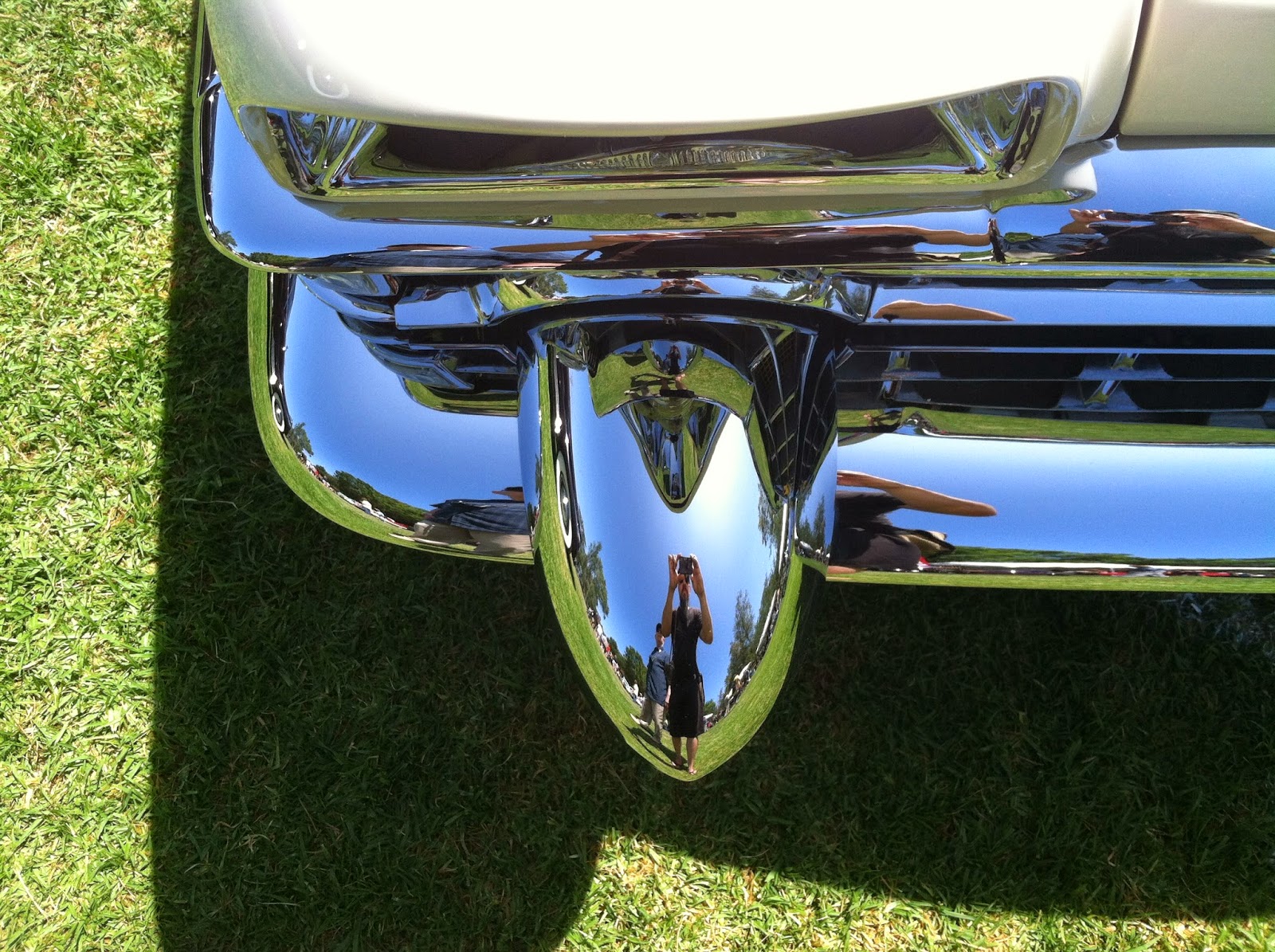 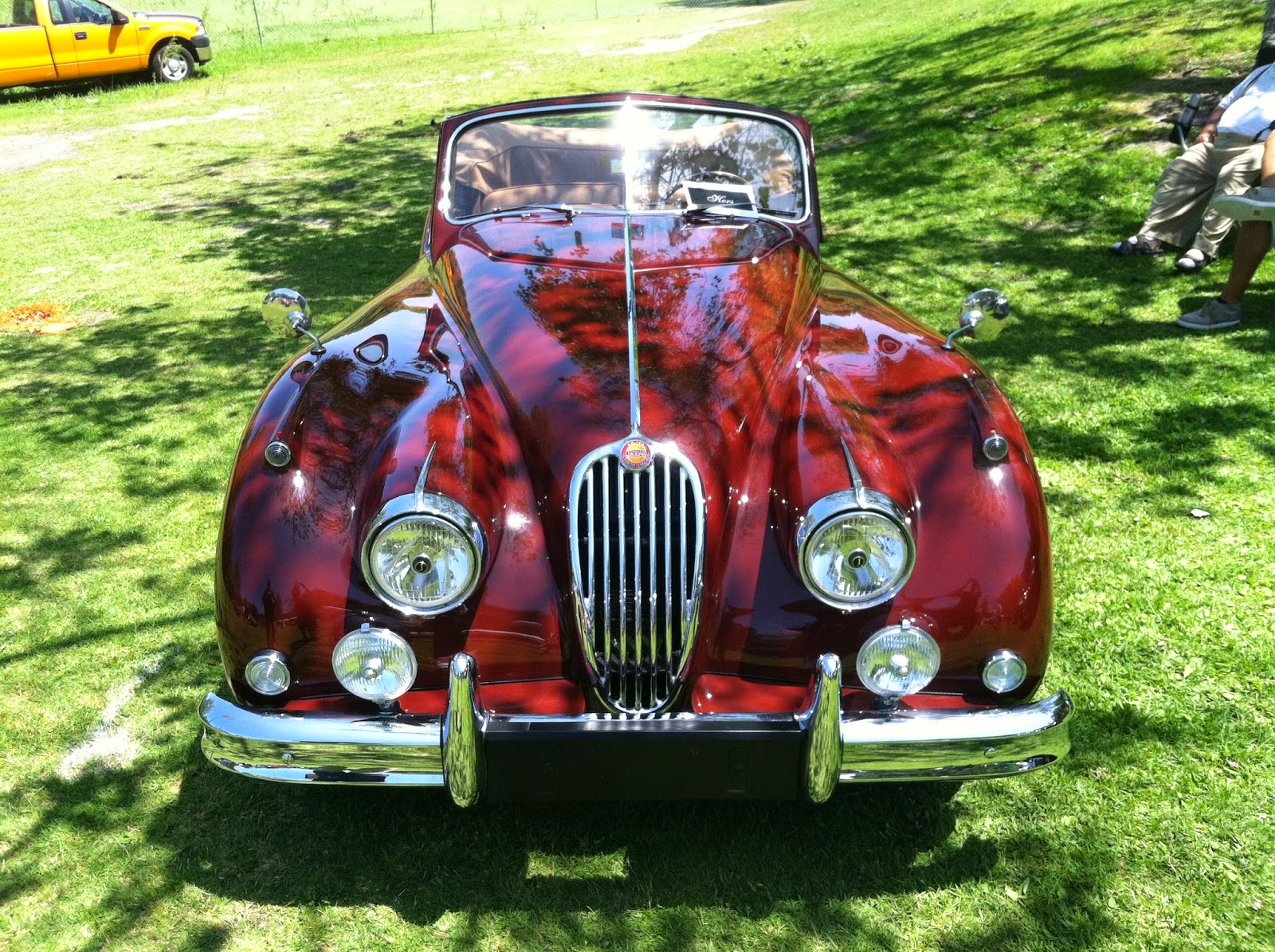 
Posted by RickMcDonoughPhotography at 12:53 PM 2 comments:

A few months back we decided to take a spring holiday in Hawaii, and settled on the island of Oahu since we handn't properly experienced that island. As one would expect when visiting Hawaii, the sundowns were brilliantly colored, the water was clear and temperate, temperatures were mild, and the pace was a bit slower. It may sound like a picture perfect cliche, and in actuality it wasn't far from it.


The Ilikai was the first luxury high rise hotel in Hawaii. Located at the western end of Waikiki in Honolulu, Hawaii it first opened its doors in 1964. It was also in the opening credits of the original Hawaii Five-O with Jack Lord standing on the penthouse balcony.

The 'Iolani Palace was built in 1882 by King Kalakaua and was the official residence of the Hawaiian Kingdom's last two monarchs. It's the only royal palace located in the United States. Not that I want this posting to revolve around the original Hawaii Five-O, but this was also the headquarters for Five-O, and Jack Lord's office. Can you tell I'm a big fan of the original Hawaii Five-O?
Posted by RickMcDonoughPhotography at 11:50 AM No comments:

A good friend of mine asked me a few months back if he could commission me to do a painting from a picture he took. He and his girlfriend love Paso Robles and it’s one of the semi-local places that they like to frequent. Located about a half hour from the ocean in the coastal mountain range of central California, it’s almost right in between Los Angeles and San Francisco on US Highway 101. It’s probably best known for its vineyards and is reminiscent of a smaller Napa, but with the convenience of being much closer to Los Angeles. The picture he asked me to work from was looking across a hill and vineyard he had taken on one of his trips to Paso Robles. I decided to paint two different canvases that were sophisticated enough to stand alone as individual paintings, but would also make one picture when placed next to each other.
http://www.prcity.com/

Posted by RickMcDonoughPhotography at 8:16 PM No comments: 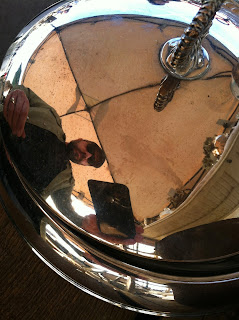 I’ve always been attracted to, and intrigued by, reflections in part because they are filters, interpretations of reality that reveal a altered perception. Unlike something that mangles and distorts beyond comprehension reflections typically tend to gently warp with curves and contours, elongated shadows that contrast, seemingly familiar shapes that taunt our perspectives making us reconsider ourselves and how we relate to the world around us. 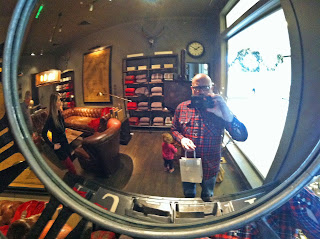 Years ago, while taking photography classes at the college level, I decided I would resist reflections. I felt as though I gravitated towards taking reflection pictures too frequently, and to be a better photographer I needed to abandon such tendencies. It ended up being a good thing that stretched me for a time but after a semester I decided to abandon the resistance. I realized that it was something that came naturally and questioned why I was restricting myself with such limitations. I suppose it was partially attributed to the fact that I began to accept that this was one aspect of who I was as a photographer and I figured I should embrace it as long as I kept it in check, and didn’t overdo it. Now that I have a beautiful daughter and it’s extremely exciting to see her take in the details of the world around her, and I find it interesting that she naturally tends towards reflections as well. Maybe all children enjoy reflections or maybe the fruit doesn’t fall too far from the tree. 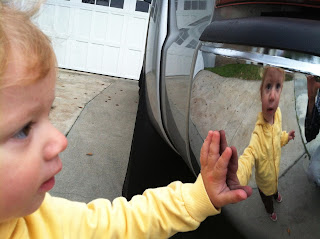 A common thread running through this latest offering of reflection pictures is that they all include people in them , and while it’s not a sophisticated medium, they were all taken with my iPhone. I must admit the lack of quality has a slight appeal but the main draw is that it’s convenient and instant, much like a Polariod, but minus the retro-cool factor. These pictures are a bit whimsical but I think that’s part of the fun and purity of them, and hopefully it captures a glimpse of where my daughter is currently. 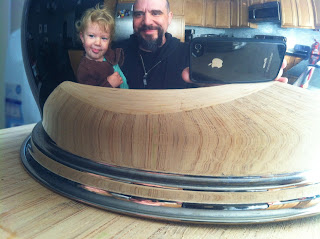 Posted by RickMcDonoughPhotography at 5:45 PM No comments: 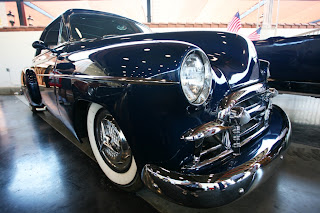 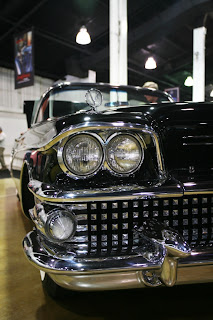 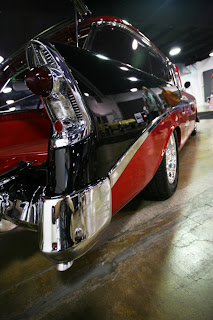 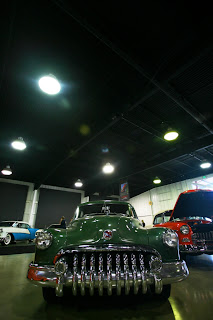 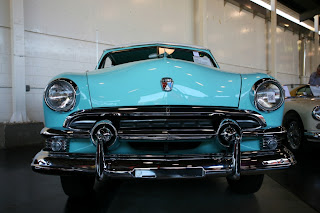 This past June 22nd – June 24th was the third time that the word famous Barrett-Jackson Auction Company auctioned off cars off at the Orange County Fair Grounds. I have been to Barrett-Jackson auctions in Scottsdale, AZ and West Palm Beach, FL, and this was my second time attending the auction in Costa Mesa, CA. This year over the three days there were over 400 vehicles and over 54,000 people.

As I passed by the Shelby booth this year I couldn’t help but consider the recent loss of Carroll Shelby who passed away this last May. Shelby raced and set records at the Bonneville Salt Flats, was  the Sports Illustrated “Driver of the Year” twice, won the legendary 24 Hours of LeMans, won the 1960 USAC Road Racing Championship, developed and ran Shelby-America , and designed the Cobra, Daytona Coupe, GT40, GT350, and GT500. Shelby was an amazingly multitalented individual who had a tremendous impact on auto racing as well as car culture.
Posted by RickMcDonoughPhotography at 11:33 PM No comments:

Paris of the West 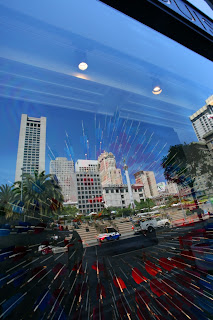 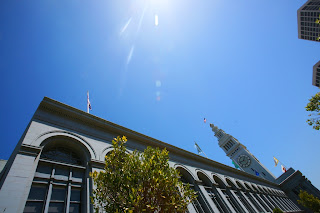 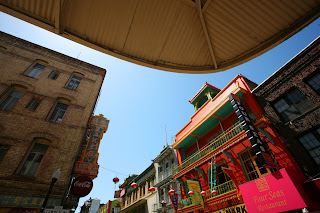 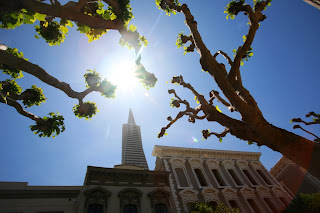 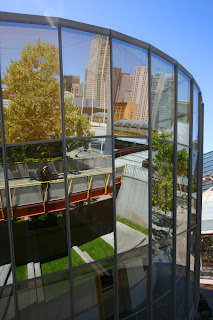 My wife recently entered an online travel blog contest on a mere whim. Shortly thereafter she and I were both extremely delighted to find out that she was one of ten selected winners. One of the perks was that the winners were put up in a recently renovated 4 star hotel on the edge of Union Square to listen to speakers who are in the industry, develop connections, enjoy the city, etc. Obviously, we couldn’t pass up the opportunity, and it was a great excuse to venture back to San Francisco. So, last month we headed to the bay for a mini holiday.

One of the landmarks overwhelmingly associated with San Francisco would have to be the Golden Gate Bridge. It opened in 1937 making this past May 27th, 2012 the 75th anniversary. The color of the Golden Gate Bridge “international orange” was not intended to be the permanent color, but was instead the primer. After seeing the bridge in this vivid color that blended with the hills as well as the city skyline, and contrasted by both the ocean and sky consulting architect Irvine F. Morrow pushed to keep the color. The color is a custom formula supplied by Sherwin Williams, and paint mixture details can be found at the Golden Gate Bridge website.

Another essential element intertwined with the essence of San Francisco is the cable car. Andrew Smith Hallidie, whose father was an inventor with a patent for “wire rope” cable in Great Britain, tested the first cable car on Clay Street in San Francisco in August, 1873. The Clay Street Hill Railroad was the solitary cable car company for four years. Several companies emerged shortly thereafter using Hallidie’s patented system, and by 1889 53 miles of track had been laid. By the late 1880’s the electric street car emerged and this technology began to threaten the cable cars. As technology “progressed” in 1947 Mayor Lapnam , for economic reasons, wanted to rid the city of cable car lines to make way for busses. Mrs. Friedel Klussmann headed the Citizens’ Committee to Save the Cable Cars, rallied, and retaliated, saving the cable cars on the November ballot with Measure 10. 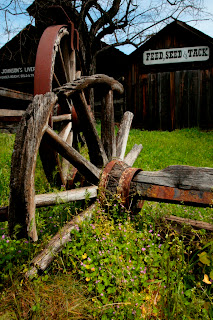 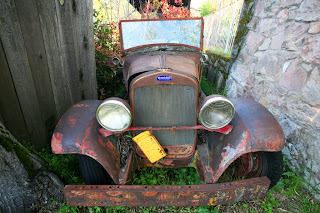 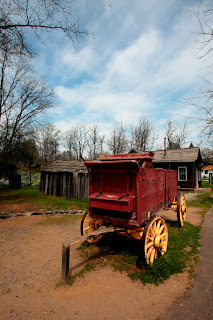 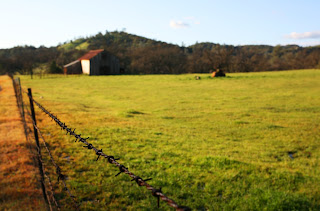 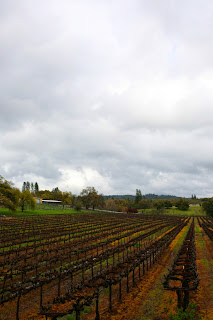 Last weekend (the weekend of May 17th – 20th) has come and gone and unfortunately I was not one of the nearly 38,000 attendees who willingly watched Hill Billy Hopper seize the 2012 Frog Jumping Championship at the Calaveras County Fair this year. However, I did just recently visit Calaveras County, more specifically Angels Camp, nestled like a golden nugget in the foothills of the Sierra Nevada Mountains. Gold Country, as it’s often referred to, has an abundance of quaint little mining towns, picturesque rolling hills, as well as hidden caves and caverns.

Twain, who had recently migrated from San Francisco out of necessity, decided to make his way to Gold Country and stayed with friends (Gillis brothers) at Jackass Hill in Tuolumne County. At one of his favorite spots that he frequented, the Angels Hotel saloon, in neighboring Calaveras County, he was told the story that he crafted into the Celebrated Jumping Frog of Calaveras County. This is the story that put Twain on the map.

There’s a lot to take in, and we did a lot of excursions while in Gold Country, including hiking in Big Trees National Park, visiting Mercer Caverns, strolling through downtown Murphy’s, driving historic highway 49, casually walking the streets of Sonora, exploring the roundhouse at Railtown 1897 in Jamestown, and the list goes on.

Of course we had to visit the reproduction of the modest cabin Twain stayed in during his approximately 90 days in this region (they believe that the cabin does at least stand where, or close to where the original did). While changing channels the other night I stumbled upon Huell Howser and his California’s Gold show, and he happened to be visiting Tuolumne County, Calaveras County, and surrounding areas in the Mother Lode. I had to watch the entire episode, in part because we were just there, but more so because Huell always seems brings a smile to my face.

We also visited Columbia State Historic Park, which is a preserved mining town that was originally started by prospectors as a mining camp in 1850. It’s a fun town to visit, especially for the family, with Wells Fargo stage coach, authentic store fronts (with actual stores and saloons), and you can even pan for gold. According to the Columbia Chamber of Commerce Columbia yielded $87 million in gold at 1860’s prices. In 1945 Columbia became a State Historic Park.

Unfortunately, every holiday adventure must come to a close at some point, and we must pack our travel bags away while temporarily entering back into the grind of the real world. Twain may have said it best when he wrote “There is no unhappiness like the misery of sighting land (and work) again after a cheerful, careless voyage” 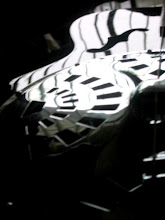 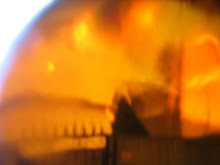 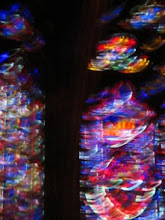 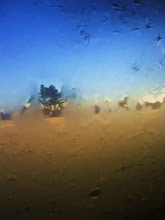